In a previous post, we shared a comparison of shared-everything and shared-nothing architecture and basic principles for how to choose these two different architectures. In this post, let us share the cloud-native ClickHouse.

We have three main objectives for building cloud-native ClickHouse (CNCH).

The first objective is to support the disaggregated compute and the storage architecture natively so that we can utilize the resources more efficiently, which can further reduce monetary cost.

The secondary objective is containerisation. We want to make all our computing resources in containers so that we can utilise some container orchestration platforms like kubernetes to help us manage clusters. Also, containerisation is a major trend, it usually means better ecosystem. Imagine if we want to extend the system to different cloud providers like AWS or Azure, if they supports, kubernetes, then we don't have to care about the lower level environment of this system. We can easily extend our system to different environments.

Last but not least, we want to optimize our system to be more user friendly and reduce operation cost.

We have some abstractions on cloud-native ClickHouse and it consists three layers as shown in Figure 1. 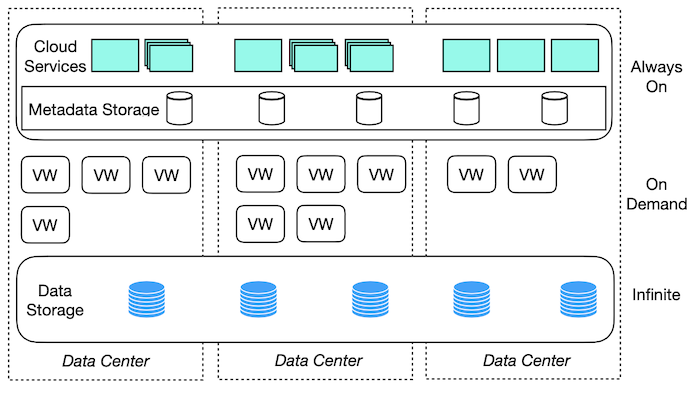 The first layer is a cloud service. User will directly communicate with this layer, we must guarantee it is always on so that the user can use the query service at any time.

The second layer is virtual warehouse layer. It is responsible for computing. This layer is on demand so that we can scale up based on users' requirement or the demand.

The last layer is data storage and it should be expanded according to the data volume.

In this section, we introduce the implementation of CNCH. Figure 2 shows all components inside the system. 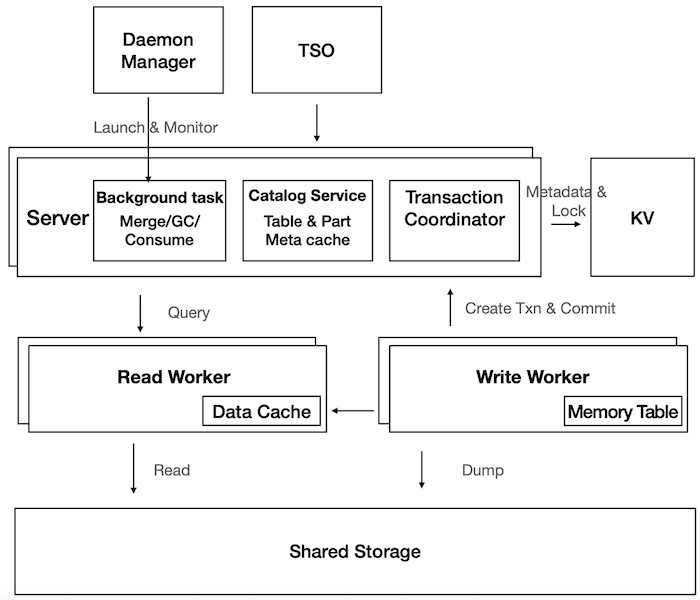 Now let's take a look how a select query is executed in CNCH . It mainly consists of 3 steps as shown in Figure 3 below:

For the write query, it's the opposite process of select query which is shown in Figure 4,

In CNCH, users don't need to be aware of how the metadata&data are managed. All of these are transparent and CNCH automatically handles everything for the users. So users only need to send the query to the CNCH and CNCH will be responsible for scheduling, allocation, execution and storage for this query.

Challenges Introduced by The New Architecture

In previous sections, I mentioned the new architecture has some disadvantages such as performance downgrade caused by remote data access. For this issue, we leverage cache to solve it. We have metadata cache on the server side and data cache on the worker side.

In order to manage our metadata more efficiently and properly, we introduce transaction semantic in cloud-native ClickHouse and provide ACID guarantee in the metadata management. 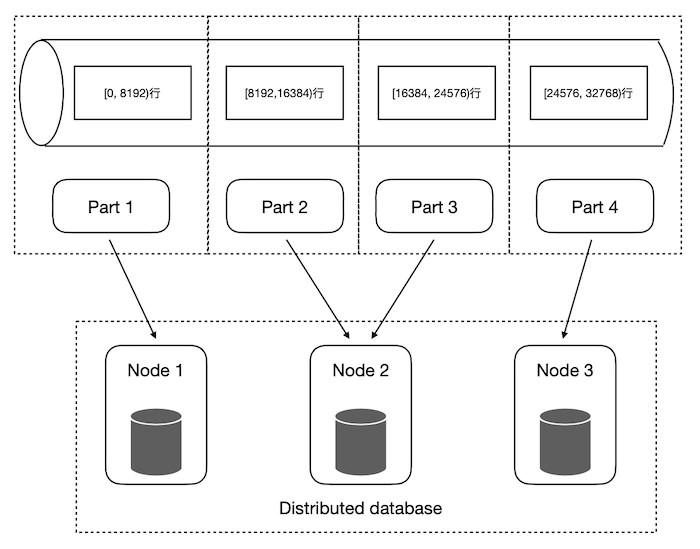 As shown in Figure 5, we have a large amount of data and all of the data will be translated to multiple parts. We manage the parts in a global shared metadata storage layer. How do we make sure all the parts can be seen at the same time is quite challenging. After we have the transaction support, we can guarantee the atomic properties.

On top of the new disaggregated compute and storage architecture, cloud-native ClickHouse can utilise resources more efficient and reduce the infrastructure cost. And, it performs query scheduling automatically to different virtual warehouse and leverage Kubernetes to manage the clusters, it significantly reduces the operation and maintenance cost. By leveraging cache, efficient metadata and data management, the cloud-native ClickHouse achieves very competitive performance as ClickHouse.

About the author: Niu Zhaojie obtained his PhD from Nanyang Technological University in Singapore. Currently, he is a senior software engineer at Bytedance and building analytics database in cloud.

What is ClickHouse? Leverage ClickHouse to speed up your data analysis